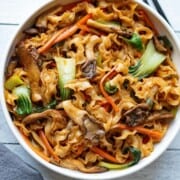 This dish is a healthy alternative to take-out. The meaty mushrooms, combined with a delicious, slightly sweet and spicy sauce, will leave you wanting more. My teens enjoyed this meal so much that I made it three days in a row! I think I must have bought all the oyster mushrooms in the store.

Why this Oyster Mushroom Noodle Stir-Fry Recipe is Fabulous

How to Make this Recipe

Oyster mushrooms are meaty, versatile, and surprisingly filling. I first tried these mushrooms at a restaurant, served as a filling for vegan tacos. At the end of the meal, I was stuffed. So much so, I canceled our plans to go for an after-dinner ice cream!

This variety of mushroom can be hard to find, but can easily be substituted for the same quantity of sliced shiitake mushrooms for making this recipe.

It can be a little challenging to remove the mushrooms from the central core, so make sure to use a sharp knife.

Most varieties of noodles will work in this recipe. I used Guanmiao noodles (made from wheat flour) to make this recipe as I love their fun shape.

Soba noodles made from buckwheat flour are healthful, and will add an earthy flavor to this dish. They can be a little tricky to cook as they tend to stick together, so follow the cooking directions carefully. Chewy Japanese Udon noodles made from wheat are an ideal texture for a stir-fry. Cellophane noodles (glass noodles) made from potato starch would also hold up well in this recipe. Rice noodles work well too as they are neutral in flavor. But they are softer in texture than wheat, so make sure to add them right at the end if using.

I used carrots, green onions, and baby bok choy for this recipe, but you can substitute for veggies you already have on hand. Firm and leafy veggies work best, such as bell peppers, spinach, cabbage, snow peas, snap peas, and baby corn. Use approximately the same quantity of veggies listed in the recipe.

Make sure not to overcook the veggies. Keep them slightly crunchy to add more texture to the dish.

Add the noodles, sauce, and mushrooms once the veggies are cooked. Heat until just warmed through. Gently combine the ingredients using a pair of tongs so the noodles do not become mushy.

Which noodles are healthiest?

Made this recipe? Share your creation with me on Instagram. It makes my day to see you recreate my recipes.

Cut the mushrooms: Use the tip of a sharp knife to cut the oyster mushrooms from the firm central stem. Discard the firm stem.

Cook the noodles according to the directions on the packet until al dente.

Cook the mushrooms: Meanwhile, heat the oil over medium-high heat in a large non-stick skillet or wok. Stir-fry the mushrooms for about 7 minutes, or until golden brown. Transfer to a plate.

Combine the ingredients: Add the cooked noodles, and sauce to the skillet and mix to combine. Fold in the mushrooms and heat until warmed through. Garnish with toasted sesame seeds.

I used Guanmiao noodles (made from wheat flour) to make this recipe, but most types of noodles will work, including rice noodles.

Oyster mushrooms can be substituted for ½-pound sliced shiitake mushrooms.

Hi Friends! I'm Nisha, a registered dietitian and Natural Gourmet Institute culinary school graduate. As a nutritionist and mom of three teens, I design my recipes to be pantry-friendly, healthful, and enjoyable for the whole family.